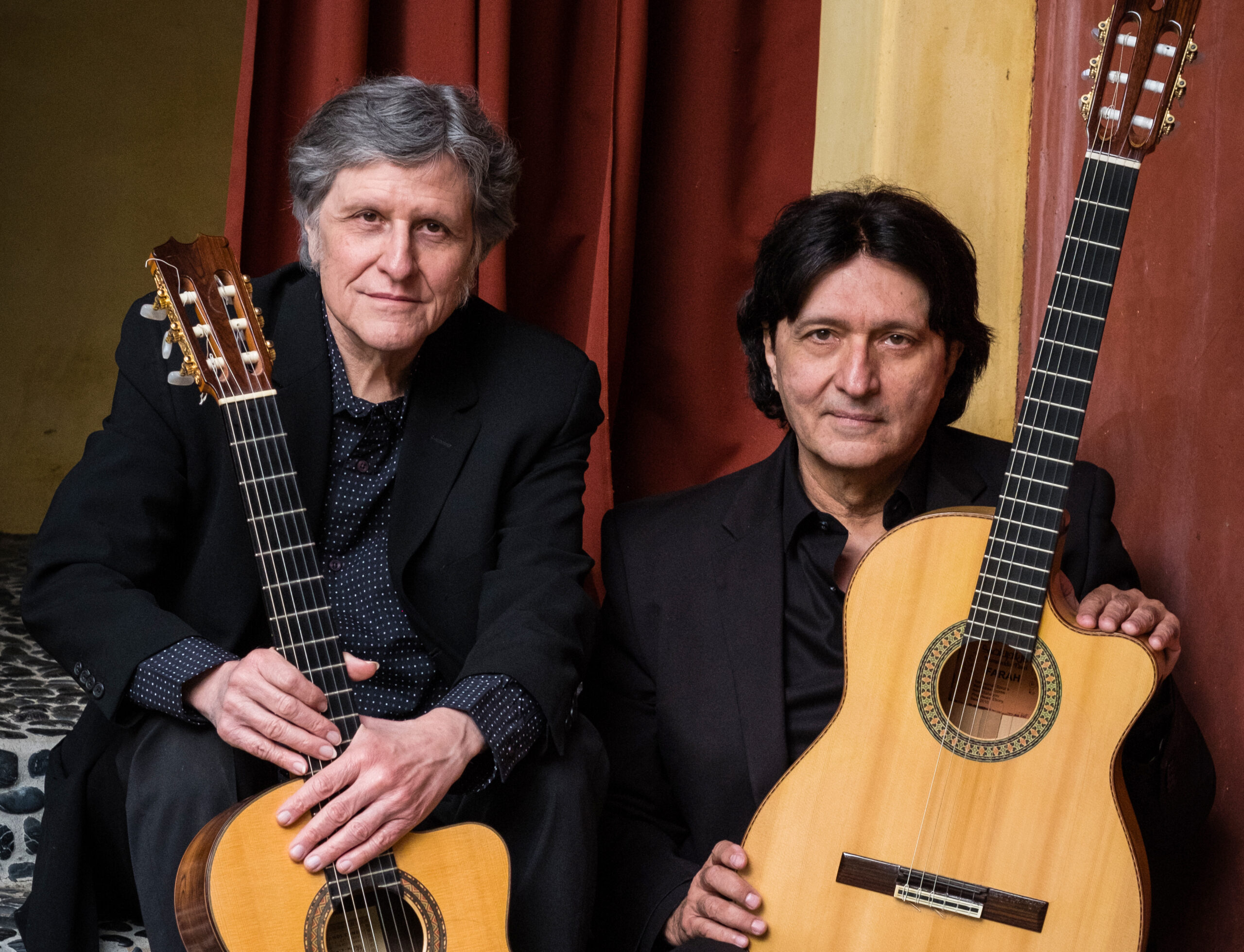 "Heat of the Sun"

STRUNZ & FARAH – TIMELINE BIO
Performing together since 1979, Grammy nominees Strunz & Farah are the innovators of an entirely new expression for the acoustic guitar. Well ahead of their time they created an original style that now is widely influential. Originally from Costa Rica and Iran respectively, Jorge Strunz and Ardeshir Farah have brought the musical influences of their native lands into their highly virtuosic, rhythmic, and improvisation-rich original instrumental compositions, inspiring fans and many guitarists worldwide. Their meeting in 1979 in Los Angeles, where they are still based, marked the first time that Latin American and Middle Eastern music, along with other important elements, came together on the guitar. They remain the undisputed masters of the style they created.

The Music
S&F’s music is perhaps best described as original multi-cultural acoustic instrumental improvisational guitar music, or world jazz. Their music emphasizes and luxuriates in sensuous melody and rhythm with a colorful and passionate expression, and is saturated with their cultural roots. Afro-Caribbean, Latin American folk, flamenco and Middle Eastern music all converge in an essentially jazz context, especially in the sense of improvisation, and is a unique contribution to the diversity of contemporary guitar music.

1979 Strunz and Farah met in Los Angeles through a mutual friend and began to prepare material for their first recording project, “Mosaico”. Jorge had just finished recording his 4th album with Caldera for Capitol Records, and Ardeshir was working with expatriate Iranian singers in LA.

1980 They recorded “Mosaico”, which received an enthusiastic response from listeners on the Los Angeles jazz radio station KKGO, and began performing together. The recording was released in 1982 on their own label Selva, and included renowned South Indian violin virtuoso Dr L Subramaniam on two tracks, as well as Luis Conte on latin percussion. It was one of the earliest recordings of what was later to be called “World Music”.

1982 They appeared on the PBS TV special Sound Festival with guests L Subramaniam and Luis Conte, Alex Acuña and others, as part of a bill with Jose Feliciano.

They played at the Ojai Festival, along with Flora Purim and Airto

1984 “Frontera”, their second album, was released on Fantasy/Milestone Records, through the auspices of Dick Bock, who was instrumental in bringing Ravi Shankar and Jean Luc Ponty to American audiences, and which included guest musicians Stanley Clarke, and Iranian santur master Manoochehr Sadeghi.

They were featured on the “Soundboard” guitar video series of John Schneider.
They performed at the Great American Music Hall in San Francisco with Larry Coryell.
They were featured and interviewed in a Guitar Player magazine article.

1985 They released “Guitarras” on Milestone/Fantasy Records, with special guests Indian sarod master Ashish Khan, and the beloved Iranian singer Hayadeh, among others.

1986 They were invited to perform at the Montreux Jazz Festival in Switzerland. Swiss press named them the “revelation” of the Festival. Claude Nobs later invited them to perform at his chalet privately for Eric Clapton and Phil Collins.

Jorge appeared with Jackson Browne as a featured soloist at the Amnesty International concerts in Los Angeles and San Francisco, which also featured such artists as Peter Gabriel, U2, Sting, Santana, Miles Davis, Bob Dylan, Joan Baez, and others.

1987 They embarked on a tour of Peru, performing in Lima, Arequipa, and Cuzco, as a guitar trio with Ciro Hurtado, which included television appearances.

They appeared with Jackson Browne, David Crosby, and Graham Nash at the Hollywood Palace for a benefit concert.

1988 They were invited by Leo Brouwer to perform their original music at the Havana International Guitar Festival. They were given the premier spot at the Teatro Nacional, and they played to a full and enthusiastic house, and the show was televised.

They recorded their album “Misterio” direct to 2-track in an audiophile recording.

1989 They recorded with Joan Baez on her album “Speaking of Dreams”.

Appeared at the Wiltern Theater in Los Angeles with Toure Kunde.

Composed and recorded the guitar music for the TV series “Drug Wars: the Camarena Story”, aired nationally on NBC in 1990, in a collaboration with Charlie Callela.

Appeared on the NBC TV movie “LA Takedown”, and performed an original composition.

1990 They recorded their hit album “Primal Magic”, which went to the #1 position on the Billboard World Music charts for 12 weeks. It was named Billboard’s “World Music Album of the Year”, and also made Billboard’s Top 200.

They embarked on a 40 city US tour with Jackson Browne, which included an appearance with him on the David Letterman Show, as featured soloists.

Jorge appeared again as an invited soloist with Jackson Browne in the concert for Amnesty International in Santiago Chile, featuring artists such as Peter Gabriel, Sting, Wynton Marsalis, etc.

1991 They toured extensively in the US with over 130 shows, including the Atlanta Jazz Festival and the Mountain Winery in CA, , and were invited to play in Costa Rica for the first time of many, where they performed for 2 nights at the Teatro Melico Salazar, San José’s largest theater.

Played at the Concord Pavilion on the show with Miles Davis.

Performed in Puerto Rico at the Salon de Bellas Artes.

Played at Royce Hall UCLA on a double bill with Flora and Airto.

1992 They recorded “Americas”, which was nominated for a Grammy for best World Music Album, and sold hundreds of thousands of copies. It was also #2 on the Billboard World Music chart for months.

Played at Stanford University, and the Mountain Winery again.

Toured extensively in the US in September and October, including a performance at the Wadsworth Theater UCLA.

Performed in Costa Rica for the second time.

1993 Strunz & Farah appeared in Paris, France for 10 performances over two weeks with their quintet.

They performed in Quito, Ecuador for their Fiestas Quiteñas.

They appeared in NYC at the Beacon Theater with Spyro Gyra and Bela Fleck.

They performed at the Concord Pavilion CA with Kenny Loggins.

They appeared at Los Angeles’ famed Greek Theater for the first time, with Dave Benoit.

They performed at the Russian River Festival in California.

They performed at Mexico’s world-renowned fine arts Cervantino Festival to an enthusiastic 8000 people.

They appeared with Manhattan Transfer in LA at the Wiltern Theater.

1994 Were invited by the Dallas Classical Guitar Society to perform at the prestigious fine arts venue, the Meyerson Symphony Hall.

Performed at the Cerritos Center for the Performing Arts in a double bill with Bela Fleck.

Recorded “Joseph and his Brothers” for children’s label Rabbit Ears with Ruben Blades.

Performed at the Greek Theater LA for the second time, with John Tesh.

Played at the House of Blues LA for first time.

1997 Played in Puerto Rico again, at the Salon de Bellas Artes, to critical acclaim, and again in Costa Rica.

Were invited to perform at the U.S. Congressional Hispanic Caucus Institute in Washington DC, with President Bill Clinton and Vice President Al Gore in attendance.

Played again at the Concord Pavilion CA, with George Benson and David Sanborn. Also performed at the Villa Montalvo in CA.

Released their first live album, “Live”, recorded in front of a studio audience in Los Angeles.

1998 Performed in Panamá for the first time at the Balboa Theater to a capacity crowd, returning also to play yet again in Puerto Rico, and in Costa Rica performed a benefit concert for the Children’ Hospital at the Teatro Nacional.

They appeared with Jackson Browne as featured soloists in a concert at the Santa Monica Civic Center which included Bonnie Raitt, Sarah McLachlan, and Los Lobos.

Performed at the Skirball Center, Los Angeles, plus many other dates in CA, including the Villa Montalvo again, and played Las Vegas.

Jorge went to India with L Subramaniam for concerts and recordings

2000 Appeared on BET Jazz national TV show; toured in the US.

Played again in Puerto Rico at the Heineken Festival, toured the eastern US and Texas, as well as dates on the West Coast and Las Vegas.

Toured US East Coast, and presented again in Costa Rica

2003 Released their DVD “In Performance”

Were featured on Woodsongs national radio show, from Lexington KY.

Other Texas and West Coast dates.

2005 Performed at the Rochester Jazz Festival, appearing with Chick Corea.

Gave concerts in Florida, and returned yet again to Costa Rica. More West Coast dates, including the Herbst Theater in San Francisco, also Texas and Las Vegas, and Vancouver Canada.

2007 Returned to Quito, Ecuador to play the Teatro Sucre.

Performed as invited guests with Rodrigo y Gabriela in LA at the Fonda Theater.

Are invited to return to the Herbst Theater in San Francisco.

2008 Tour of Eastern Canada, including another appearance at the Montreal Jazz Festival, and the Rouyn Quebec Festival.

Jorge is invited to accompany Sting on his remix of “Send Your Love” for the “Songs for Tibet” project recording.

Jorge released his first solo recording, “Neotropical Nocturnes”, with Ardeshir appearing on the piece “Idilios” as a special guest.

Were invited by Rodrigo y Gabriela to play a piece with them on their album 11:11

Played at the Nashville All Star Guitar Night at the Ryman Auditorium with Tommy Emmanuel and others.

2011 Released “Journey Around the Sun”, their 14th studio album.

2012 East Coast, including a show at BB King’s Blues Club in Manhattan, and Canada tours, including yet another appearance at the Montreal Jazz Festival.

Panama invited them back for another concert.

Were invited to present two concerts in India, one in Mumbai, the other in Delhi, to great reviews.

2013 Were invited to the Heineken Jazz Festival in Puerto Rico.

2014 Released their album “Moods and Visions”, featuring the percussion of Luis Conte.

Performances in Canada, and the Northeast US Coast; twice in NYC. Numerous West Coast shows.

Invited to play at the Maui Blues and Jazz Festival.

They were featured on Troy Grady’s “Cracking the Code” Youtube Channel.

2017 Played two concerts in Merida, Mexico: at the Teatro Peon Contreras, and in the Atrio de la Catedral.

2018 Released their album “Tales of Two Guitars”, which was rated #3 in Amazon’s Hot New Releases in the Fusion category.

AWARDS:
• “Americas” nominated for Grammy for Best World Music Album 1992.
• Their album “Primal Magic” was named Billboard”s “World Music Album of the Year” 1990.
• Jorge, as part of Strunz & Farah, was awarded a Premio a la Superación by President Calderón of Costa Rica for his cultural achievements in 1991.
• In 1994, Jorge was given an award from the Presidency and Ministry of Culture of Costa Rica for his work with Ardeshir Farah.
• In 1995, Billboard Magazine recognizes them as among the top 10 World Music Artists overall.
• In 1998, Jorge was given an award for their benefit concert for the National Children’s Hospital in San Jose, Costa Rica.